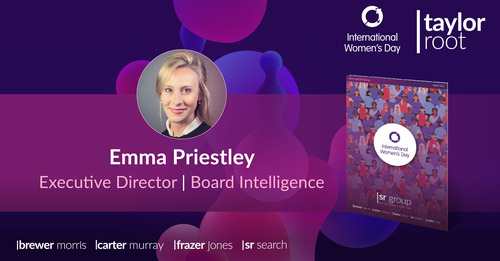 What impact could Kamala Harris’ appointment to Vice President have on the next generation of female leaders?

Showing that anything is possible and that the ‘glass ceiling’ is there to be smashed. If a woman can be Vice President, then of course women can become astronauts or nuclear physicists – or whatever they want to be. In fact, I’ve been struck by the number of senior female scientists and virologists leading the fight against COVID. So be it science, politics or business, what’s stopping women from becoming leaders? That said, despite the recent progress in getting more women on boards thanks to The Davies and Hampton Alexander Reviews, it’s astonishing that only 5% of the FTSE 100 have female CEOs – with only 2% across the FTSE 250. This has to change. I’ve been lucky that I’ve never felt the weight of a glass ceiling or any kind of professional disadvantage as a woman. I was fortunate to have gone to a great all-girls school and be supported by a family who never once suggested that my gender may hold me back or that certain careers were for men only. So when I started my university degree, I had utter conviction that I was equal to the boys – now men – in my peer group. And when I started my first job, the firm I’m still at 10 years later, I knew it was merit and performance that would determine my success – nothing else. Half of us in the senior executive team are women, including both of our co-CEOs. I realise how lucky I am to have this corporate support and to have had confidence and self-belief instilled in me from a young age. I hope this is something I can replicate for my own daughter as she grows up.

What is one thing women don’t talk about enough?

Babies! I’ve been back from maternity leave nearly six months and despite working at the business for years, I was surprised by how long it took me to catch up and get back into the swing of things. I eased back in with a three day working week, which slowly increased to four days and now five days. Despite the full support of my co-CEOs, who both have young families themselves, it’s only now that I’m doing five days do I feel I can do justice to my work and protect family time at the weekend. When I was working part time, through no fault of anyone’s, work commitments leaked into my days off which made me feel guilty as a mother, while struggling to keep up at work – it was a tough few months. The challenge is, I want to have it all. I want to be the mother at every play, sports match, parent evening, who lovingly makes the packed lunches and supports the school bake sale. But I also want my own career and to have my professional identity. It’s a constant balance and the more I think about it, the more it seems that ‘having it all’ is a pipe dream. But if anyone can vouch for the contrary, I’d love to know their secret!

What are you really, really good at?

Getting stuff done. Now perhaps this is a girl thing…because as the old adage goes most women are world class at multi-tasking. But I’m ruthlessly efficient (my husband would argue it’s impatience) and am ferocious with blitzing any to do list. Someone once told me their golden rule of ‘if you can do it today, don’t wait until tomorrow’ which I rather like. I can’t claim to live by every day, but it’s a mantra I try to follow.

Click below to read the full edition of IWD2021 #ChooseToChallenge: Female Leaders Across The Globe.